The Purosangue, which Ferrari touts as its first-ever "four-door, four-seat model," has been unveiled. The long-awaited Purosangue, a member of the Ferrari lineup, will compete with vehicles like the Lamborghini Urus and Bentley Bentayga, albeit the Italian automaker declines to categorise it as an "SUV." Ferrari claims that the Purosangue differs significantly from the current crop of high-performance SUVs in many ways, including its sportscar-like front-mid engine position and rear-mounted transmission (allowing a 49:51 weight distribution). 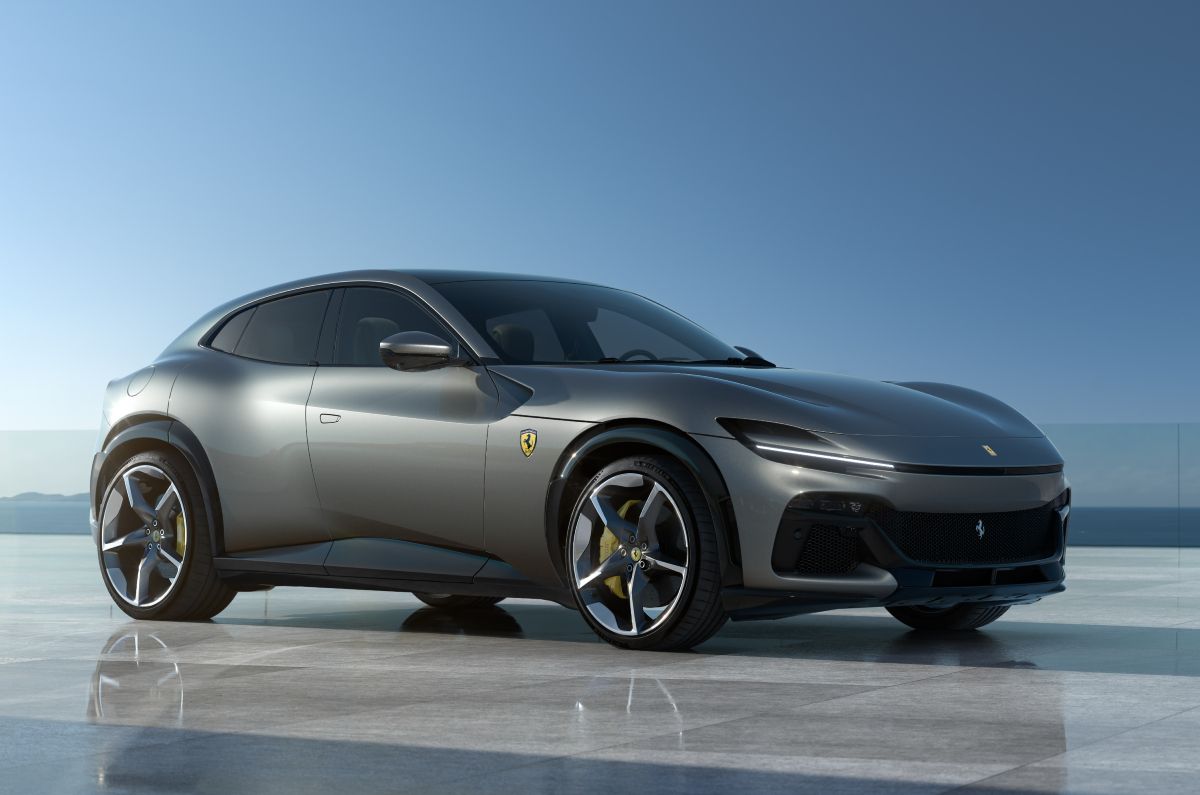 We can also confirm that the Purosangue is not your typical super SUV in appearance, having seen the vehicle in the flesh at Ferrari's design headquarters (Centro Stile) in Maranello. The Purosangue has a lower roof than a Urus and resembles a Ferrari sports car on stilts. And the impact is enormous. It has a striking profile thanks to the tall bonnet, angular roofline, and snug tail. When you look closely, you'll notice that the wheel arches and doors have cladding that reduces the visible mass and neatly hides several modest aero aids.

The Purosangue's appearance is defined by its more prominent components, which were sculpted to reduce drag and maximise airflow. The main headlights are positioned lower in sizable ducts, while the higher LED Daytime Running Lamps are bordered above and below. Ferrari's take on the split headlamp configuration. An "aerobridge" at the edges of the bonnet, similar to the F12 Berlinetta.

The Purosangue lacks vertical pillars and geometric characteristics resembling an SUV. Sinuous lines and thoughtful details abound. The roof line flows beautifully, and the taillights have a faint visual resemblance to the SF90 Stradale. The Purosangue is unlike any previous Ferrari.

Ferrari always constructs back doors elegantly. The Purosangue's back doors have a rear hinge and swing open to greet you. The fully powered rear doors open to a 73-degree angle, making accessing the back seats of a Ferrari easier than ever before. Although the seat squab isn't the most generous, the two individual rear seats, which can be adjusted for position and backrest angle, give passengers a sporty seating position.

However, it's not a deal breaker because the Purosangue is now more appealing to purchasers who want a Ferrari but also need seating versatility. Although there isn't as much room in the back as in a Urus, the optional electrochemical glass roof helps make the interior feel airy. The 373-litre boot is accessible from the back seats, and there is a rear centre console with in-seat options.

The driver's seat is the greatest one in the house. You have an excellent perspective of the road from the driver's seat, but you won't be towering over other drivers; picture a mid-size sedan's seating posture. With driving modes and different settings on the steering wheel itself, all functions are easily accessible. Due to a unique display on the dash, the front passenger will also feel immersed in the action.

Italian meaning thoroughbred, the Purosangue represents Ferrari's distinctive approach to the animal. High-power twin-turbo V8 engines dominate the performance SUV sector, but the Purosangue will debut with a new 65-degree, 6.5-liter naturally aspirated V12 petrol engine. At 7,750 rpm, the engine generates 725 horsepower, and at 6,250 rpm, 716 Nm. A compelling soundtrack and a V12 were required, according to Ferrari officials. Although Ferrari has not confirmed it, a turbocharged V8 could be added to the lineup in the future.

The direct injection V12 has been modified to maintain its typical crescendo-like top end with a frenetic 8,250 rpm redline while delivering 80% of its peak torque at 2,100 rpm. A 2-speed front power transmission unit and an 8-speed rear-set dual-clutch transmission provide engine power to all four wheels. According to reports, downshifts have been set to "emphasise the sound of the V12," Shift times have reportedly improved over Ferrari's previous 7-speed DCT.

The Purosangue is the heaviest Ferrari ever, tipping the scales at 2,033kg (dry). Performance, though, is on par with that of its low-slung siblings. 3.3 seconds for 0–100 km/h, 10.6 seconds for 0–200 km/h, and a top speed of more than 310 km/h are the headline figures. Carbon ceramic brakes on vehicles provide the necessary jaw-dropping braking performance.

Deliveries of the Purosangue begin in Europe in the second quarter of 2023, and right-hand markets like India won't receive the vehicle until the year's closing months. Even before the car is officially unveiled, Ferrari has indicated significant interest in the model. Although the automaker is adamant that Purosangue output would never exceed 20% of overall production, wait periods for delivery are projected to last well beyond a year.

The Ferrari Purosangue is anticipated to start at more than Rs 6 crore (estimated ex-showroom) based on pricing disclosed for the European market. The base price is Rs. 3.7 crore.