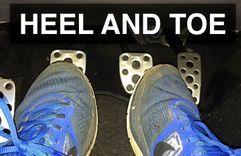 What is heel and toe?

This advanced driving technique makes a big difference to a certain set of drivers.

Heel and toe is a highly advanced driving technique that is employed primarily by race-car drivers, and it is done to limit the time lost during gearshifts. However, owing to how efficient the practice is, it is not uncommon to see people using it in everyday driving conditions.

The concept is tricky to master, but very doable if practiced well enough. How it works is by using the throttle and brake pedals simultaneously with the right foot, all the while using the clutch lever as you would normally with your left foot. This can only be done in a car fitted with a manual transmission, and is used when braking and going into a higher gear, typically before a corner entry. What this allows the driver to do is match the RPM (or engine speed) to the next gear, before engaging said higher gear.

The benefit is that, under normal operation, there would be a big jolt to the drivetrain, thereby unsettling the car. For everyday usage, this is not that important since the speeds are low, but when time and speed are of the essence, like they are for racer drivers, using the heel and toe method can result in a sizeable difference to the overall lap time during a race.

However, it must be noted that this can only be done in vehicles where the brake and accelerator pedals are not too far apart. Regular production cars aren't made with this technique in mind, but there are plenty of instances where cars are modified specifically to enhance the driver's ability to employ the technique.