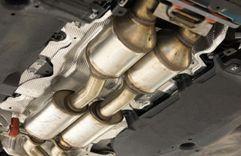 What is a catalytic converter?

Not immediately visible, but the catalytic converter plays a very vital role in cars today.

The internal combustion engine is a key component of the cars we drive, but it also is the cause for harmful exhaust emissions. Manufacturers, however, curb the effect of these harmful fumes with the use of something known as a catalytic converter. Often simply called a catalyst or cat-con, this is a stainless-steel canister fitted to a car's exhaust system that contains a thin layer of catalytic material spread over a large area of inert supports. The material used is some combination of platinum, rhodium, and palladium; it induces chemical reactions that convert an engine's exhaust emissions into less harmful products. Cat-cons are seen in cars that use petrol or diesel, and the first widespread examples of a cat-con were seen in the United States to comply with its Environmental Protection Agency is regulation of exhaust emissions.

There are two main kinds of cat-cons: a 2-way and a 3-way. The former mainly deals with two simultaneous tasks oxidation of carbon monoxide to carbon dioxide, and oxidation of hydrocarbons to carbon dioxide and water. The latter, which is more complex and far more commonplace in today's cars, has the added advantage of controlling the emissions that cause acid rain and smog.

Catalytic converters, thanks to where they are located on cars and their use of valuable precious metals, are unfortunately subject to a fair amount of burglary. The problem is quite evident in cars that feature a higher ground clearance.