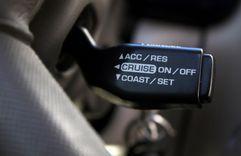 What is Cruise Control?

Here's how cruise control works and why it is such a great invention.

The purpose of a cruise control system is to accurately maintain a speed set by the driver without any outside intervention by controlling the throttle-accelerator pedal linkage. This is very useful when covering large stretches of road that are well-marked and traffic-free. The earliest variants of cruise control were actually in use even before the creation of automobiles. The inventor and mechanical engineer James Watt developed a version as early as the 17th century, which allowed steam engines to maintain a constant speed up and down inclines. Cruise control as we know it today was invented in the late 1940s, when the idea of using an electrically-controlled device that could manipulate road speeds and adjust the throttle accordingly was conceived.

The driver can set the cruise control with the cruise switches, which usually consist of On, Off, Resume, and Set/Accel. These are commonly located on the steering wheel or on the windshield wiper or turn signal stalk. The Set/Accel knob sets the speed of the car. One tap will accelerate it by 1km/h. Tapping the knob in the opposite direction will decelerate the vehicle. As a safety feature, the cruise control system will disengage as soon as you hit the brake pedal.