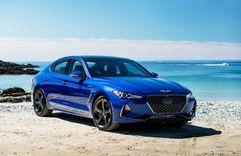 There are a lot of options in today's car market with more than 400 different models and many car types available. Making sense of it all can be difficult. Here are some car models

A sedan has four doors and a traditional trunk. Like vehicles in many categories, they're available in a range of sizes.

A coupe has historically been considered a two-door car with a trunk and a solid roof. This would include cars like a Ford Mustang and Audi A5.

These are the sportiest, coolest-looking coupes and convertibles - low to the ground, sleek, and often expensive. They generally are two-seaters, but sometimes have small rear seats as well. Cars like Porsche 911 and Mazda Miata are typical sports cars.

SUV(Sport-Utility Vehicle)SUVs often also referred to as crossover tend to be taller and boxier than sedans, offer an elevated seating position, and have more ground clearance than a car.

Traditionally, the term "hatchback" has meant a compact or subcompact sedan with a squared-off roof and a rear flip-up hatch door that provides access to the vehicle's cargo area instead of a conventional trunk. Cars like Volkswagen Golf and Kia Stinger are such cars.