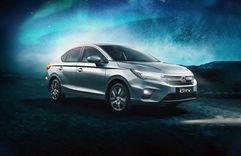 SUVs may rule the roost today, but the Honda City, even 22 years on, is still alive and kicking, and is one of the longest-running nameplates currently on sale in India. The City is India story began in 1998 and we've had four versions since. The first three cars were all very unique in character, with each model being a success for Honda.

The 4th-generation was more of an evolution, but thanks to the further improvements and introduction of a diesel option, it went on to become the most successful City in India, and it is this very evolutionary approach that's been carried forward to the 5th-gen City.

While it is based on a modified version of the earlier City, the engineering changes are massive. The new City is body shell packs in more high-tensile-strength steel and a stiffer roof section, resulting in a 20 percent increase in torsional rigidity. The body shell is marginally lighter too, but the overall weight of the car is up by around 40kg thanks to other enhancements like a firewall that is 200 percent thicker aiding stiffness, safety and sound insulation.

Honda's badge value in India is also a key part of why the City has been doing so well in terms of sales.